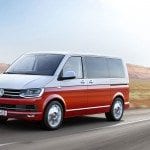 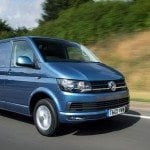 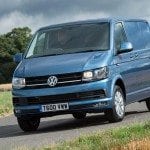 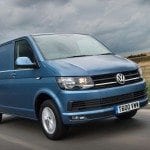 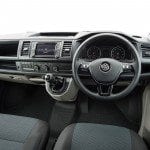 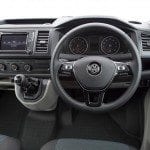 If the familiarity of this T6 generation Transporter’s look is is bugging you, that’s because Volkswagen has adopted an ‘if it isn’t broke’ policy. So what you’re actually seeing here is the most comprehensive of facelifts. The chassis and fixed points are the same, so both the dimensions and capacities of the various T6 body configurations remain largely the same.

That’s no bad thing. In fact it’s very good. The T6 Transporter is a peach: an extremely fuel efficient, high quality and refined stuff-lugger, with a notable reduction in cabin noise compared to its predecessor, the T5.

You do, of course, get redesigned bumpers and lights, so if you were to place a T5 and a T6 side-by-side, you’d see the modernisation. That’s not least because of the T6’s lovely LED daytime running lights – one bit of technology of many that’s lifted from Volkswagen’s passenger car range.

The engine range is derived from those found in your everyday Golf with the mainstay a Euro 6 compliant 102PS 2.0-litre TDI boasting a claimed 47.9mpg combined – a big improvement on the old model.

The cabin also gets a refresh, with new seating materials and trim. The driver will get car-like assistance and safety systems, with adaptive cruise control, automatic city braking and post-collision braking. A driver monitoring system will also be fitted as standard, with audio and visual signals triggered when the driver’s behaviour indicates fatigue.

However, the T6 doesn’t simply shine because Volkswagen has thrown the entire passenger car stock cupboard at it – it shines because it’s taken a strong base and made it even stronger. One or two obvious giveaways aside, this is as car-like a van experience as you could hope for.

Even driven empty, the T6’s overarching characteristic is of calm refinement, with a notable lack of engine, wind and road noise, especially at lower speeds.

It does, of course, get gruff when any of the diesel engines are pushed, but that’s rarely required thanks to plenty of low down torque. The ride quality serves up typical Volkswagen smoothness without ever suffering from that over-soft bounciness that plagues some vans, especially around town.

Taller drivers may find a lack of legroom in the front because the seats don’t go back far enough, which assists in making the driving position quite ‘short-legged’ and perhaps tiring over longer journeys.

This is not a problem exclusive to the Transporter though and elsewhere the T6 feels as car-like as you could hope for. The steering is wonderfully light and the pedals are set up a charm, making this an extremely easy van to drove smoothly.

Despite the relatively low horsepower rating, the smooth turbo diesel engine has been tuned to deliver the bulk of its 250Nm from just 1500rpm. Much like the old Volkswagen PD diesel engines, it maximises its punch in a quite narrow but easily accessible power band. That makes it feel stronger than it actually is. It’s a perfect companion for a heavy-laden van bustling about town.

By contrast, the new 204PS twin-turbo diesel falls slightly short under the weight of expectation. When it comes in 2016, replacing the 180PS BiTDI, it will make for the most powerful standard commercial vehicle on sale.

While it’s a more sophisticated, silkier unit than anything that’s ever powered a Transporter, it doesn’t feel quite as punchy as it should. If anything, it highlights just how good the engine rated at half the horsepower actually is. Interestingly, Volkswagen is toying with the idea of bringing TFSI petrol versions to the UK for the first time too, but that’s to be confirmed.

Volkswagen has resisted becoming the first manufacturer to really up the plastics game of a van interior. So, even though it’s just about the best there is in terms of matching class, utility and durability – as in, it looks good, has lots of storage space and is screwed together properly – there’s not a soft-touch surface in sight.

Clearly a van is supposed to be utilitarian, but why must they all take their plastics from the school of hard knocks? That said, for the Caravelle, Volkswagen has covered most of the open cubbyholes with soft-closing, high-gloss panels, and they do highlight how tastefully designed this cabin is.

The multimedia system is also lifted from Volkswagen’s passenger cars department. It’s one of the most intuitive around, so here it seems positively futuristic and is another plus from the driver’s seat.

If you’re looking for outright space above all else, the Transporter T6 hasn’t cured the T5’s fundamental space deficit compared to key competition like the Ford Transit Custom and Vauxhall Vivaro.

And as before, your choice for the panel van is two wheelbases, three roof heights and two seating combinations, while the Kombi does without the roof options.

The unchanged dimensions, both interior and exterior, mean that existing T5 owners’ fixtures and fittings will be easily transferable. That’s money saved, which especially for small business users will be good news.

The sliding side door remains, and buyers can specify rear barn doors that open to 250 degrees unlatched. They open to reveal a low, wide loading lip with a fully lined floor featuring six anchorage points (or eight in the long wheelbase version), while a pair of dome lights provide interior illumination, plus one for the step.

Both rear barn doors have an inner release handle, as does, of course, the sliding side door, which at just over 40 inches is wide opening – though not quite enough to accommodate a Euro pallet.

Including all the engine and gearbox choices there’s a typically labyrinthine selection of Transporter possibilities, though mercifully there are only two trim levels: Startline and Highline.

The result, including all the engine and gearbox choices, is a typically labyrinthine selection of Transporter possibilities, though mercifully there are only two trim levels: Startline and Highline.

Startline comes packed with standard kit, including Bluetooth phone preparation, a five-inch touchscreen media and infotainment display, a USB connection for playing all your favourite R&B hits, remote central locking and a suite of safety systems including lane change assist with side scanning, a driver alert system, and hill hold assist.

You’ll be able to distinguish a Startline van by its black plastic bumpers and steel wheels, while a Highline makes the former body coloured and the latter alloy. Inside, Highline vans get cold air (climate control, no less), automatic lights and wipers, a heated windscreen, heated mirrors, a leather steering wheel and gear knob, a better alarm, cruise control, parking sensors, and a pair of those handles on the A-pillars whose function appears solely to display one’s bicep to other motorists.

There’s more equipment besides, with the result that a Highline Transporter really feels like a high class, high quality product – and one that Volkswagen itself is keen to stress is highly influenced by its car range.

Interestingly, buyers will also be able to specify one of a few two-tone paint options, with contrasting top and bottom halves. Initially Volkswagen UK was against the idea, until it showed a couple to dealerships and they basically demanded it. It’s a painstaking and partly manual process to complete the job, we’re told, which is why it’s expected to cost in the region of £1500 as an option.

A whole raft of safety system are available, much of it groundbreaking in the van market. These include Emergency City Braking and Active Cruise Control. The latter will prove very useful for those driving big miles on the motorways, especially abroad.

Other than that, it’s as you were for the Transporter. It remains the classy choice. The choice for those who want understated refinement first, outright space second. That said, this is still a capacious and flexible van.

The sixth-generation model launches with the widest range of engine, transmission and trim level options ever offered by Volkswagen and introduces a host of new design and engineering features, along with new assistance and safety systems. Prices for the new Transporter T6 panel van start from £17,745 (excluding VAT and other OTR charges), with order books opening on 6 July.

The new Transporter panel van and Kombi range consists of three trim levels, all of which enjoy significant equipment boosts over the outgoing model.

In keeping with Transporter tradition, the new T6 model offers a range of body options and gross vehicle weights to suit the needs of all operators and drivers. In addition to three roof height options; standard (1,410 mm), medium (1,635 mm) and high (1,940 mm), the new Transporter is available with four gross vehicle weights (ranging from 2,600 kg to 3,200 kg) along with short and long wheelbase options.

From launch, the Transporter engine range consists of four 2.0-litre TDI Euro5 engines with outputs of 84 PS, 102 PS, 140 PS and 180 PS (Highline only) and a 2.0-litre TDI Euro 6 unit that develops 102 PS. All models benefit from Volkswagen’s acclaimed BlueMotion Technology modifications as standard. These include low rolling resistance tyres, and regenerative braking and Start/Stop systems, to reduce fuel consumption meaning the new Transporter is cleaner and more efficient than the outgoing model. For example, the 2.0-litre 102 PS Euro6 panel van SWB can return 47.9mpg on the combined cycle (a 10.2mpg improvement) and emits 153 g/km of CO2 (a reduction of 45g/km).

The 2.0-litre TDI Euro6 engine will be joined by additional Euro6 units over the course of the next 12 months, with 150 PS and 204 PS powertrains added to the range. These advanced new units feature a range of improvements designed to increase efficiency and drivability.

All 84PS and 102PS engines are fitted with a five-speed manual gearbox as standard, with 140PS and 180PS units equipped with either a six-speed transmission as standard or a seven-speed DSG automatic.

At Three Bridge we pride ourselves on our range of options and the high specifications of our finishes when we are carrying out a campervan conversion. Campervan conversions are a brilliant way of making use of a used or pre owned van and converting it into a motorhome. If you do not already own a VW Transporter then we can help source one for you from approved stockists that we partner with. Our Company have been performing conversions on campervans for many years and we hold ourselves to the highest standards. If you are interested in our VW Camper Conversions please get in touch with us today.